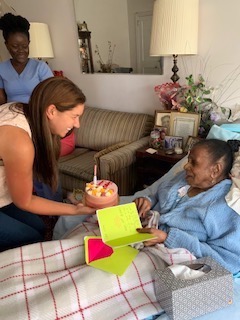 This Week, We Wish a Happy 103rd Birthday to Our STEPS Home Care Client Ednar Taylor in Mamaroneck, NY.

We would like to wish a Happy 103rd Birthday to our STEPS Home Care client Ednar Taylor born on July 16th, 1916.  Ednar has been a Mamaroneck resident for over 50 years and raised her family in the same house she resides in today.

As an active and dedicated resident in the community of Mamaroneck, Ednar received her nursing degree from Brooklyn College and was a school nurse for the Rye Neck School District for decades.  She also was the clerk of session to the Harrison Presbyterian Church for over 40 years and the Queen Mother in the Red Hat Society the group called "Leading Ladies" for New Rochelle. She is a widow to her beloved husband Robert Taylor, who was the first African American police officer in Mamaroneck. She still resides in their home where they raised their children, and her granddaughter lives with her.

Close family friend Barbarann, as she refers to as "Bobbie," knew Ednar since she was six years old in grade school and has lived across the driveway since that time.  Ednar was her school nurse and remains to be an extremely meaningful person in her life.

“Ednar has been by my side since I was a child and now after losing both my parents, she is irreplaceable to me! It's ironic as she lovingly took care of me as a child and now somehow it has come back for me to return the favor,” said Barbarann.

Ednar shares her birth year with some other famous actors and scientists such as:

Gregory Peck (April 5, 1916) was one of the most popular film stars from the 1940s to the 1960s, receiving five Academy Awards for Best Actor nominations, and won once – for his performance as Atticus Finch in the 1962 drama film To Kill a Mockingbird.

Jackie Gleason (Feb 26, 1916) was an American comedian, actor and writer. Developing a style and characters from growing up in Brooklyn, New York, he was known for his brash comedy in his character bus driver Ralph Kramden in the series The Honeymooners

Francis Crick (June 8, 1916) was an English molecular biologist and recipient of the Nobel Prize in Physiology or Medicine 2004.

Feast of Our Lady of Mount Carmel

July 16th also happens to be the Feast of Our Lady of Mount Carmel, which was probably first celebrated in England in the later part of the 14th century. Its object was thanksgiving to Mary, the patroness of the Carmelite Order, for the benefits she had accorded to it through its difficult early years. This holiday is special for both Lisa Martire Wade and Jennifer Martire Baukol, co-owners of STEPS Home Care as they have celebrated this holiday with their mother and grandmother at the Elmsford church https://olmcchurchelmsford.com since they were small children.

STEPS Home Care is a family, female, and locally owned Licensed Home Care Services Agency with offices in White Plains, NY, Stamford, CT, and Garden City, NY.  Our goal is simple.  Provide you and your loved ones with peace of mind by using 3 guiding principles:  FAMILY, PASSION, and STABILITY.